There is room for improvement – how to achieve this?

Prof. Dr. Annemieke Aartsma-Rus is a professor of Translational Genetics at the Department of Human Genetics of the Leiden University Medical Center. She played an important role in the development of the antisense mediated exon skipping therapy for Duchenne muscular dystrophy during her PhD research (2000-2004) at the Leiden University Medical Center (the Netherlands). As of December 2007 she became leader of the “DMD exon skip group”. Since 2013 she has a visiting professorship at the Institute of Genetic Medicine of Newcastle University (UK).

Her work currently focuses on developing antisense-mediated exon skipping as a therapy for Duchenne muscular dystrophy. This involves work in cell and animal models to improve delivery and efficiency of exon skipping compounds, studies in muscle regeneration and pathology, the identification of biomarkers, studying the basics of pre-mRNA splicing and transcript processing and the generation of mouse models. In addition, in collaborative efforts she aims to develop the exon skipping approach as a therapeutic option for other rare diseases and to bridge the gap between different stakeholders (patients, academics, regulators and industry) involved in drug development for rare diseases.

She is President of the Oligonucleotide Therapeutics Society (2019-2021) and the TREAT-NMD executive committee (2013-2016 and 2019-now), vice-chair of COST Action CA17103 (Delivery of antisense RNA therapies) and member of the Core Committee of the TREAT-NMD Advisory Committee for Therapeutics (TACT). In 2013 she was elected a member of the junior section of the Dutch Royal Academy of Sciences (DJA), which consists of what are considered the top 50 scientists in the Netherlands under 45. In 2018, she was one of the founding members of Young Academy Leiden (YAL), the local Leiden counterpart of the DJA. She has been selected as most influential scientist in Duchenne muscular dystrophy in the past 10 years by Expertscape based on contributions to the understanding and treatment of Duchenne muscular dystrophy five times in a row (2015-now).

Thus far, she has published over 200 peer-reviewed papers and 11 book chapters, as well as 15 patents and has edited one book. She has given many invited lectures at meetings, symposia and workshops as well as patient/parent organizations meetings, where she is known for her ability to present science in a clear and understandable way. She has created and maintains multiple websites on therapeutic approaches for aimed at patients and parents. In 2011 she received the Duchenne Award from the Dutch Duchenne Parent Project in recognition of this work and her dedication to the Duchenne field. In 2020 she received the Black Pearl Science Award from Eurordis for her work in educating patients in the Duchenne field and other rare disease fields. She writes regular blogs for the LUMC.

She is a member of the Therapies Scientific Committee of the International Rare Disease Research Consortium (IRDiRC). She is co-editor in chief of Nucleic Acid Therapeutics, and serves on multiple editorial boards, e.g. Journal of Neuromuscular Diseases (associate editor), Molecular Therapy, Therapeutic Advances in Rare Disease and Cardiovascular Genetics and Genomics. She is a member of the TREAT-NMD project ethics counsel and of the TREAT-NMD Advisory Committee for Therapeutics (TACT) and the scientific advisory board of Genethon. 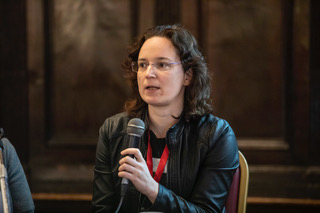